Cornwall is a county located in the south-western part of England, on the peninsula westward of the River Tamar. Truro is the county’s only city and it is also the administrative centre. Cornwall has a geographic area of over 1350 square miles and includes the Isles of Scilly which is some 30 miles offshore. The county of Cornwall is well known for the wild moorland landscapes, the wide and varied coastline and the mild climate. Cornwall is also world famous for the Stone Age structures that can be found there. Its industrial archeology including the historical mining landscape are designated a world heritage site.

History of Cornwall
The history of Cornwall began when Britain was reoccupied after the last ice age. The inhabitants also included people who spoke the Celtic language that would eventually become the Cornish language. At the end of Roman rule, Cornwall returned to the independent Celtic chieftains. It is believed that the name Cornwall came from the Roman term for the people that inhabited Cornwall during Roman rule, the ‘Cornovii’. Cornwall is sometimes thought of as one of six so called ‘Celtic nations’ including Brittany, Ireland, the Isle of Man, Scotland and Wales. Some residents would like to see greater autonomy for the county.

Climate and ecology
Cornwall’s climate is a relatively warm and sunny one. Its winters are considered mild, with frost or snow rarely occurring except in the central upland regions. Average temperature for the year in most of Cornwall is approximately 9.5 to 11.8 degrees Celsius. Because of its location, Cornwall is exposed to the mild, moist westerly winds from the Atlantic and therefore has a seemingly high rainfall.

There is a wide variety of habitats that includes terrestrial and marine ecosystems, to be found in the county. Many species of plants in Cornwall are protected under the national UK Biodiversity Action Plan. 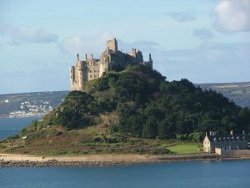 These days the economy of Cornwall relies mainly on tourism. The tourist industry accounts for close to 25% of the economy. With Cornwall's rich culture, unusual landscape and relatively mild climate, it has become a popular destination for many tourists. Cornwall is fortunate to have miles of sandy beaches and steep cliffs. Some of the other attractions include moorland, gardens and wooded valleys.

Its large coastline, makes Cornwall a popular site for various maritime sports. These include sailing and surfing. Cornwall also was host to the Inter-Celtic Watersports Festival in 2006. Pilot gig rowing is very popular and the World championships occurs annually on the Isles of Scilly. Rock climbing both on sea and inland cliffs is also popular and is now a well developed event in the county.It is estimated that over five million tourists visit Cornwall every year.

Cornish food
Cornwall has fresh seafood that is readily available because of ts location. Many restaurants offer cuisine from local dishes to international recipes. Cornwall is also well known for its pasties, which is a tasty dish made from pastry containing suet. They can also be made with jam, apple and blackberry.